As an affiliate, we earn from qualifying purchases. We get commissions for purchases made through links in this post.

Everyone wants cleaner indoor air, and when you consider that indoor air is often more contaminated than the air outdoors, buying a good air purifier is never a bad idea.

The Xiaomi air purifier has been taking people by surprise because it is such an efficient purifier, and there are several models of them to choose from. The 3C and the 3H are two of these models, but which one is the best for you?

This article will put the Xiaomi 3C next to the 3H and compare the features and benefits of both of these air purifiers. 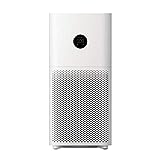 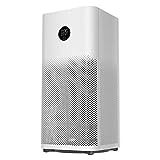 Xiaomi 3C Versus 3H – The details

To determine which model is best for you, it’s a good idea to compare the same features to one another so that you can tell the difference. Features such as room coverage, available modes, physical appearance, display screen, and the hardware matter when it comes to air purifiers. Below we compare these key features between the 3C and the 3H

The Xiaomi 3C is a great machine with many useful features including long-lasting filters and smart control all contained in a strong and sturdy design.

The 3C model doesn’t cover as big of an area as the 3H model, but it will still cover 40 square meters. In many ways, the two models are very similar when it comes to the coverage area, but the 3C model is definitely not made for super-big spaces.

The Xiaomi 3H and 3C air purifiers look virtually the same, but there are still some minor differences. For one thing, the 3C model spews out air from four sides instead of only three sides like the 3H does. Instead of the cable being at the bottom of the unit, the 3C places the cable in the middle, which may or may not matter to you.

The Xiaomi air purifier 3H has a screen that is touch-sensitive, which is something you don’t get with the 3C model. However the screen on the 3C is very clear and easy to read giving instant information about the quality of the air in the room. You can also check the status of your WIFI connection and the operating mode. You can also adjust the brightness of the display.

Unlike the Xiaomi air purifier 3H model, the 3C has no temperature-humidity sensor, which means it is unable to measure those two things in the environment. This factor may affect the unit’s ability to clean the air when it’s in automatic mode. It also means that you will never be able to see on the screen what the temperature and humidity numbers are. In addition, the 3C model uses only 29 watts of energy, which is much less than the 3H model. It is also a little more affordable.

The 3H is a super-powerful,m super quiet machine that’s suitable for small to medium-sized rooms. The main problem with this device is if you have a Google setup and wish to connect it as many customers have reported problems with this.

The first thing people usually do when deciding which air purifier to buy is to decide how big of an area the purifier is able to clean. For this, measuring the size of the room is the first thing you need to do. The Xiaomi air purifier 3H model covers up to 45 square meters. Unless the room you need purifying is bigger than this, the 3H model will do just fine.

There is an automatic mode on the 3H model that determines the cleanliness of the air. It does this with special sensors, which then either increase or decrease the effectiveness depending on what it needs to make sure the air is clean. You also get a night mode that allows you to sleep without being disturbed, as well as another mode that you can adjust manually. This one has four different levels. Once you decide which mode you like best, you can set it as a Favorite so using it again is a lot easier.

The 3H and 3C models are the same when it comes to their size. The 3H model has no closed area on it except for the grilles, which absorb the air it’s taking in. The design also allows for the cable being placed from below, which means it isn’t visible from the middle. Many people wonder if this makes it easier or more difficult to clean, but users say it doesn’t interfere with the cleaning process at all.

The Xiaomi air purifier 3H has a screen that is touch-sensitive, which is something you don’t get with the 3C model. The screen also gives a little more feedback than the 3C model. In essence, the display screen is more user-friendly than the screen on the 3C model, and one of the advantages of this is that you can switch from one mode to the next by simply touching the screen.

Unlike In some ways, the 3H air purifier is a little more advanced than the 3C air purifier. For one thing, it has a temperature sensor that people seem to enjoy. It also consumes 38 watts of energy, and while it is a bit more expensive than the 3C model, the price difference is not so big that it will matter to most people.

There are also differences in these two air purifiers when it comes to the filters. The 3C model uses a cylindrical HEPA filter that is able to remove 99.99% of particles that are up to 0.1 micron in size. This includes cigarette smoke, bacteria, viruses, and various odors. The 3H model uses a 3-in-1 true HEPA filter, which is included with your purchase. It can remove PM2.5, formaldehyde, and numerous other very harmful substances. In this respect, the two models seem to be very similar.

It’s also important to keep in mind that both the 3C and 3H air purifiers made by Xiaomi are smart devices that you can connect via Google Home as long as you have a Wi-Fi connection. If you link them to Google Home, you can even use voice commands to control Google Assistant, which is a very convenient feature to have. You can even see the air’s cleanliness through the app. Just look for the colored line that has a number on it. This number shows the amount of pollutants in the air in that particular room.

You can’t go wrong with either one!

The Xiaomi air purifier is very efficient and comes highly recommended by customers. The 3C model has an advantage in the sense that it’s more affordable than its counterpart, but there are also some differences (like how well the 3H connects to Google) between them which could affect your decision-making process when deciding on what type of machine will work best for you home environment (i e size).

Although these two models share many similarities; they each have their own unique selling points so make sure to weigh all aspects before purchasing so as not regret later down this road… The air we breathe indoors is much worse than the air outdoors. Fortunately, there are air purifier/air conditioner combos that keep your home cool and purify the air at the same time.

Air Purifier vs. Humidifier for Baby: Which is Best?

Is an air purifier or a humidifier what you need for your baby’s nursery?